Why Are Norton Products So Terrible ... Now?

I have fond memories of many old Norton products ... the Norton Utilities, Norton Desktop, even Norton Antivirus in its early Symantec incarnations. But somewhere around the time that Norton/Symantec introduced Product Activation, things turned sour. 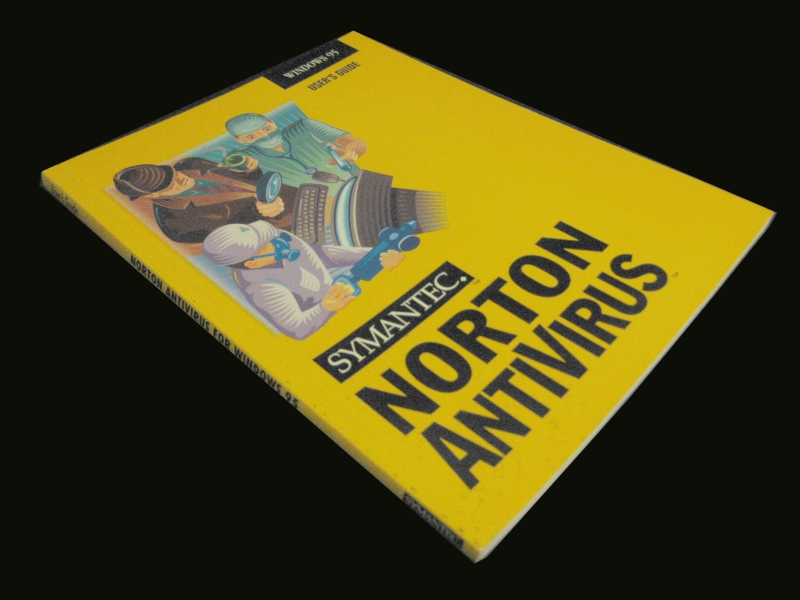 Not that that's the problem - even though I once had to pay for Symantec's Antivirus suite twice on my wife's computer because of an unresolvable error with the antivirus subscription. The problem wasn't so much the Product Activation per se, but that the software got into an unstable state which prevented it from accepting the subscription - which I could prove that I paid for - and eventually the only way to fix it was to nuke the site from orbit, reinstall everything, and pay again. 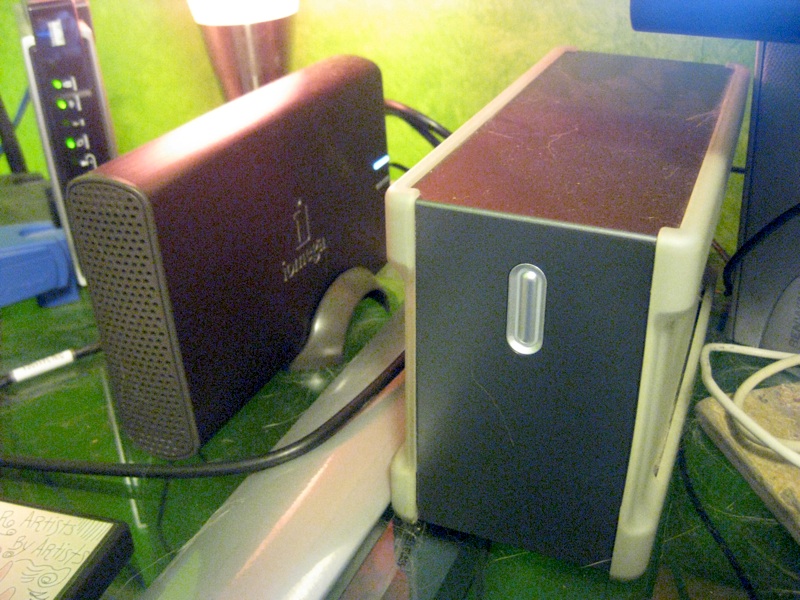 And therein lies the kernel of the problem: it's so easy for Symantec (née Norton) products to get into an unstable state, activation or no. There's the antivirus issue I mentioned. I once installed Norton Antivirus on a PC with Zone Alarm installed, and the two products got into a death match over which one was the "real" firewall even though I was not trying to install Norton's firewall features. There have been several other instances, most with Norton 360 Premier Edition, and now this: 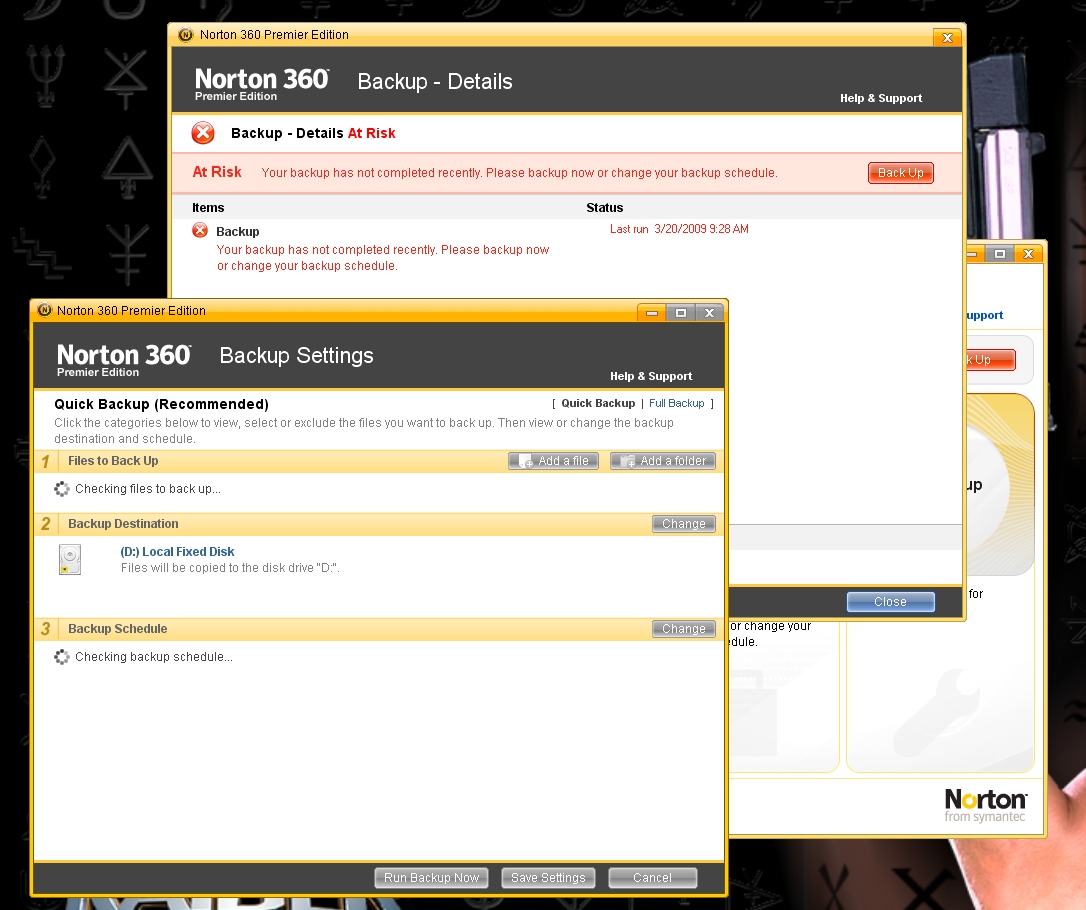 You can't see it in the picture, but Norton 360 is frozen like a Canadian lake in winter. Recently our main backup drive for our Windows workstation died, and I replaced the old Maxtor with a larger Iomega drive. However, when I went to change the backup to point to the new drive, Norton locked up trying to determine ... what, I don't know. Files to back up? Looking for backup locations? It isn't clear. On the first try of this, it appeared to be frozen checking backup schedules:

It stayed there the whole time I was working on this article (up to this point). Right around the time I wrote that sentence, I finally killed Norton and restarted ... no dice. Now it can't even find the backup locations: 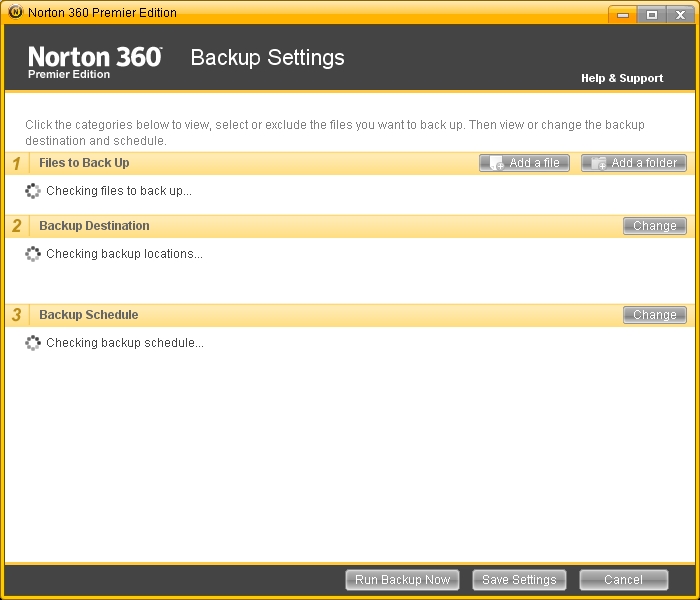 There is no excuse for software to be written this way by a professional company with collectively over 30 years experience. This is the kind of crap I write the very first time I whip together a utility for a new operating system, before I learn where the blocking calls are. A program should never block on a dialog finding something as simple as a list of backup schedules, much less files or anything else. Modern computers have millions of cycles a second available to realize a call is taking a long time, present the list of items found so far, and give the user the opportunity to do something - which, in this case, would be me telling it to forget the old backup location and to try the new one. Instead, I get this, still frozen trying to find a list that could be easily cached, interpolated, discarded, supplanted, SOMETHING:

This goes to my overall rant on what's wrong with disk and networking software. Modern web applications like GMail have vast abilities to cope when servers are offline. Networking and disk operations, in contrast, are either blindingly fast, or pause for minutes or even hours, obviously befuddled but never bothering to pass that information on to the user. Someone, I can't remember who, wrote an article about this a few years back, pointing out that it was all related to design decisions we'd made early on in computing that are wrong. He sketched out how you could design a computer to never effectively lose data, even if you powercycled in the middle of writing an essay, by changing how we think about saving data. I'll dig up the essay, but for right now, we STILL have THIS, frozen in the same place:

At the time of this writing I've spent almost THIRTY MINUTES waiting on Norton to perform what should have been a two minute operation: changing a backup disk and starting the new backup. This makes my problems with Apple's Time Capsule look trivial. By the way ... Time Capsule is working perfectly now. Time to switch my wife to the Mac?

Postscript: we went and worked out, and this window was still up, an hour and a half later. I took the pictures I needed for this article; then, I did what I hate to do: asked my wife to log out (in her session, she was working on proposals and had half a dozen windows open) and rebooted the machine. When we returned, Norton worked just fine. I started this article feeling nostalgic for Norton/Symantec's older products; well, Norton gave me what I wanted, and took me all the way back to 1995, when you had to reboot to do anything.

It's all right, Peter. We still love you. This isn't your fault, nor is it necessarily something that the hardworking people at Symantec could have fixed in this instance. But if I don't complain, you'll never know anything was wrong.

This is much worse than the problems I encountered with Norton and McAffee, problems which already inspired me to make the switch to AVG and then to Avira's AntiVir (when AVG started demanding too much attention).
# posted by

The Singularity is Now The Ogre Mark ... 0.1? I figured out why my computer's not working... You can blog from your mobile phone with a text me... monorail squirrel This is Xeriscape The Layman's Guide to the Fanboy View of Star Trek Dakota Frost More on why your computer needs a hug How Long is Frost Moon?