The Wizard. The Warrior. The Seer. The Saint. The Scientist. The Mystic.
And the young girl who can take them...
...anywhere she can imagine.

The Gallery is OPEN!

A whole passel of my art can now be seen on the Gallery page.

Kudos to Gordon for pointing out IrfanView, which made building the gallery a breeze.

And in other news, Fanu Fiku: Premonitions starts online October 4th and will run weekly. As I get ahead/behind on Fanu Fiku, I may or may not try to get Death Wish finished in online comic form as well.

SO I'm sitting in a panel atAnime Weekend Atlanta 10 listening to the always delightful Piro talk about how drawing works for him, busy taking notes while sketching faces for practice in the margins.

Then the panel ends ... and a young lady sitting next to me asks me to do a sketch, because she liked what I was drawing so much. Then someone else commented on my t-shirt. And finally, out of the blue, while I was talking to a distributor of the fanfilm "Batman vs. Joker vs. Aliens vs. Predator vs. more Aliens vs. more Predators", he asked, "So, do you have a web site, and is any of your stuff on it?"

So, OKAY, I get the point! I'll put f@nu fiku and my other art online already. The gallery is half done, hopefully to be finished by Wednesday, and the front cover of Fanu Fiku will go up on Monday.

I saw it again (all of it, this time) with my girlfriend, who wasn't too surprised I didn't like it ... she likes escapism, I want realism. But as time went on the sheer visual beauty of the movie, wooden acting, and tin dialogue faded in my mind, and I was struck by how many beautiful ideas there were in the movie. How many clever touches it had. How many little pieces just fit together. How well, despite its flaws, the overall story was told.

And then I ran across this little snippet on how they made it. and was struck by the love the director had for his subject: the skyhook on the Empire State Building that the Hindenberg III docks on was real ... the Hindenburg III was really on the drawing board ... and many of the other things in the movie were from Mr. Conran's childhood dreams. And so he buckled down, with a cheesy computer and no funds, and made his dream fucking happen. You go with your bad self.

So, I forgive you, Mr. Conran, for the flaws in your movie: you really did turn out an amazing piece of work, and I apologize for my snap judgement. But, please, given the amazing skill you show in every other area, please, please, please write and direct some small plays where you focus on dialogue and work with real actors BEFORE you've storyboarded out your next multimillion dollar movie.

I promise you, if you turn out several small shorts just for you and your friends in a context where it's safe for you to go out on a limb and try and fail, then your next movie will kick "Sky Captain's" butt.
// posted by Anthony Francis @ 9:12 PM Permalink (1) comments

Perhaps I was too hasty...

... for others who just saw "Drek Captain and the World of Stupidity" questioned whether I was seeing the same movie they were. I can't answer that; all I can say is that what I was watching was the moment visual style finally vanquished intellectual substance. Perhaps I was too hasty. Certainly the movie was visually imaginative.

Because there are no heroes.
If you want to save the world, stand up and do it yourself.

I walked out halfway through.

As a side project right now I'm investigating computer languages --- not just experimenting with Perl vs. Python but trying to expose myself to different families of languages, such as functional, logic, imperative, object oriented, and obfuscated.

Most recently, someone mentioned that array languages are the least
widely known family --- perhaps because the founding language in the group,
APL, was written with a nonstandard character set. Perhaps the most terse
of all programming languages, APL spawned a series of children, like J and K,
which, even though they can be written in a normal alphabet, retain APL's
essential terseness --- or, dare we say, obscurity?

I plan to learn J. However, before I did so, I committed myself to learning
at least a smidgen of the original APL, so I could see how the language was
originally intended to work and look. 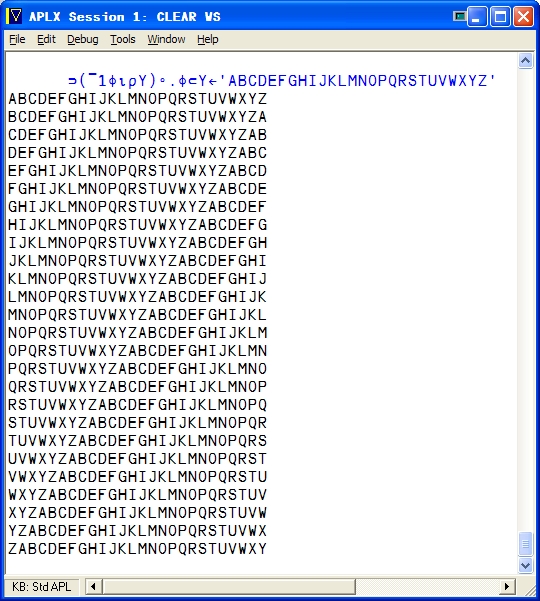 Note the code isn't in the standard ASCII character set, so I had
to represent it as an image file.

The heart of the code is the central box of the next image. This should read as:


and executes right to left: 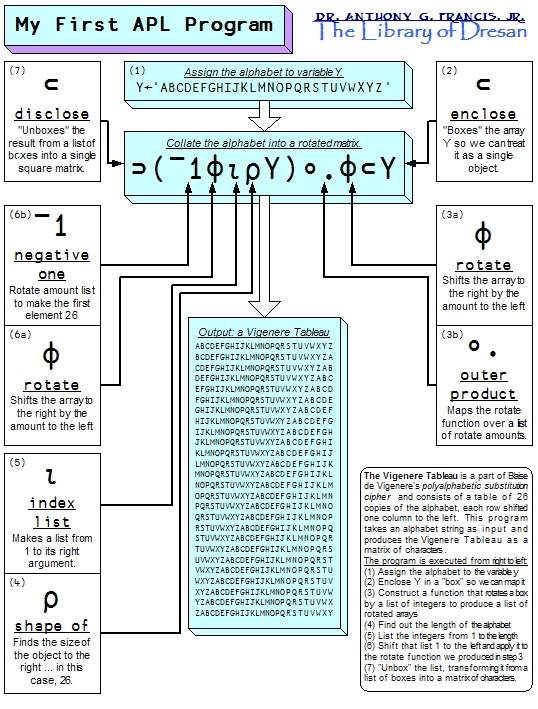 To translate into pseudocode:


The idea in my mind was to take an input array and print
a diagonalized rectangle with it. With the alphabet, this
becomes a Vigenere table --- once the "indecipherable cipher",
now a trivial matter for any modern computer.

With a different string, like "01" or "_[]" (reading the two
brackets as the APL Quad character), and a suitable change
in length of the output, it becomes instead a checkerboard: 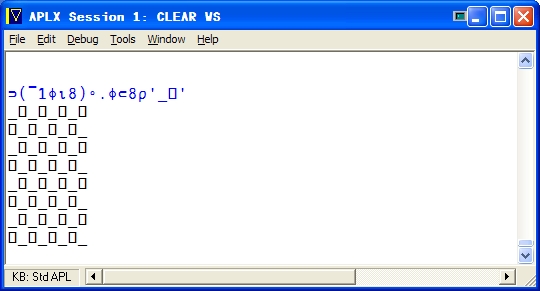 Deciphering that is left as an exercise to you, dear fanu.

And now a test of the dresan.net Wiki ... enjoy.

Cut me some SLAC!

I just had some pictures developed and found these gems from my November 2003 trip to the Stanford Linear Accelerator:

Some of the other pictures developed are so old that, well,
let's just say that half the couples in one Christmas shot are
either getting divorced or have been for some time now.

Oy, do I need a digital camera.

I and my old high school buddy William just came back from seeing "Resident Evil 2: Apocalypse".

And while there were many things I enjoyed about the movie, and even think it had the skeleton of an interesting plot, both William and I had the same reaction.

Simultaneously, we *tried* to excuse its suckitude by dissing it as a "B" movie, but immediately realized it was at best a "C" movie.

"Aliens vs. Predator", how we miss thee.

OK, now we've lit this candle. This isn't the permanent form of this weblog --- I've allocated the site and software for a full-blown wikiblog upcoming soon --- but at least now the blog and the hand-generated site are integrated, and I can post at the click of a button. Woo hoo!

And to tide you over, here's a pointer to where I get my physics news.

Post a Comment
John Wiseman over at lemonodor noticed this amazing Periodic Table of Perl Operators put together by Mark Lentczner: 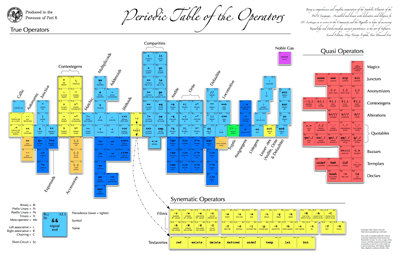 Pretty inspiring to a language designer, and a great example of information design for everyone else.

Post a Comment
Yet another test of blogging features ... if you want to see the original site, check out:

More news as it happens.