The Layman's Guide to the Fanboy View of Star Trek 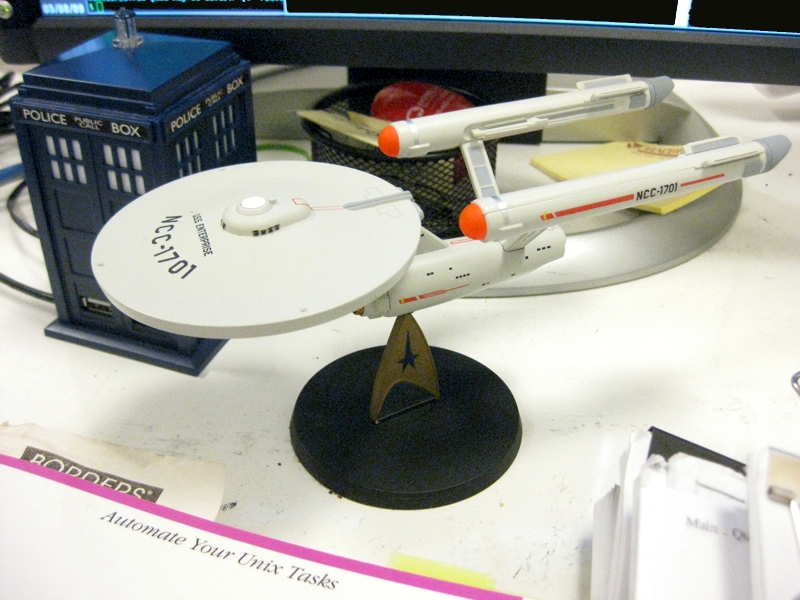 There's been some confusion recently about the "fanboy reception" of the new Star Trek movie - some people going so far as to say "fanboys will hate it because they changed everything". Well, speaking as a fanboy who recently was seriously arguing with my high school friends about whether J.J. Abrams shitted or pissed on our childhoods (and no, I'm not joking, those literal words were used), I beg to differ: my problems with the movie are with the movie as a movie, and particularly with its plot logic, not with its degree of Trekkiness.

I'll deal with the problems the movie has as a movie later (e.g., Nero is mad at Spock because ... Spock tried to save Romulus? WTF?!), since the movie is so good on an acting/directing level I don't want to give it too much bad press. (No, really, if good acting is your bag, run to the theater, baby; similarly if you like humor, excitement, action or adventure you won't be disappointed. If you care about a movie making sense ... eh.) Right now I want to show that it is indeed a good Trek movie. To see why, let's go through the Fanboy's Official Star Trek Movie Checklist and see how J.J. Abrams fares.

First off, the big three that we need in any Star Trek movie:
So we're two for three, but if we give them two points for Spock they're batting 1000. Now let's look at the fan service angle:
Now, what about the other things, the fanboy nonsense? The phasers and transporters are off, and we see starships with odd numbers of warp nacelles, but those are nits - the special effects get redone in every movie and every show, and if Enterprise can believably portray a Vulcan ship with a donut-shaped warp nacelle then J.J. Abrams can have the one-warp-engine Kelvin.

Now, I admit I think some of the changes J.J. Abrams made undermined himself - for example, I think the change of the phasers both made them harder to see visually as well as disconnecting them from Star Trek's heritage. But those are minor nits. Get over it - I did, and I'm probably a bigger fan than almost all of you. 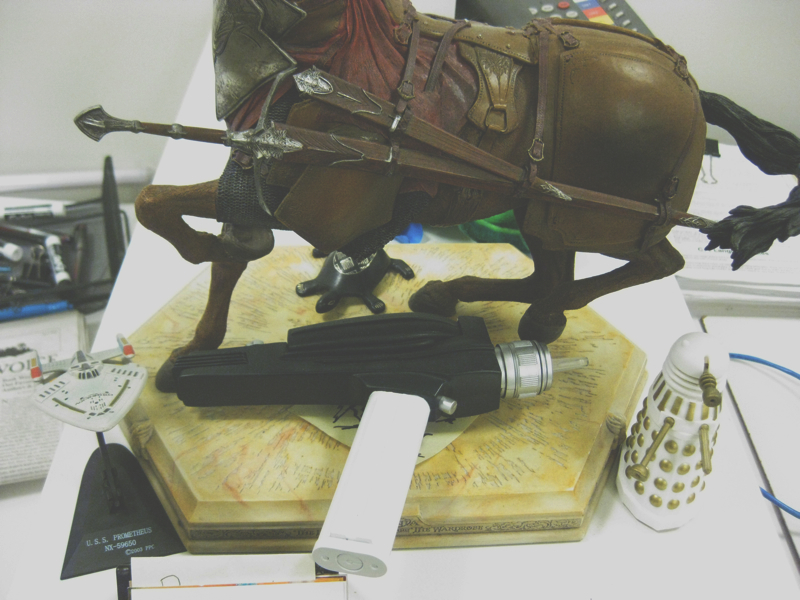 On the broad scope, Star Trek was Star Trek. No two ways about it.

Pictured: the first pic is my desk at the Search Engine that Starts With a G, including a model of the original Enterprise from TOS. The second is my bookcase, including a model of an original hand phaser and a model of the U.S.S. Prometheus from Star Trek: Voyager. The blue box USB hub and the salt shaker with the plunger and ray gun are both from Doctor Who. For those who are confused by the horse without a head, it's a centaur from Narnia.

Dakota Frost More on why your computer needs a hug How Long is Frost Moon? Frost Moon: Coming Fall 2009 Star Trek - (Not Really A) Spoiler Review Recreating Artistic Accidents dub-dub-dub dot DakotaFrost dot com Links for 2009-04-27 Just a little bit harder... "Never get in a boxing match with a cat..."