Why I Use Transparent Terminal Windows

I use transparent windows for my terminals, so you can see beneath the text to other windows or desktop backgrounds beneath. I've done it for a long time on Linux as just a neat trick to show the desktop beneath whatever I'm typing, but it works better if you can see the actual window beneath the terminal. On Windows you can do this with various add-ons (don't remember which one worked best, so sorry no link), but it works well natively on the Mac and recently with Compiz I've gotten it to work the way I want on on Linux.

Combined with the microscopic fonts I like, this makes my screen hard to read for others; one of my collaborators used to insist I make the windows opaque and increase the font size so he could see them. So why do I do this? Even the Mac OS X tips page that tells you how says it "has no serious purpose" except to make your windows look pretty.

Well, I beg to differ. This screenshot shows why: 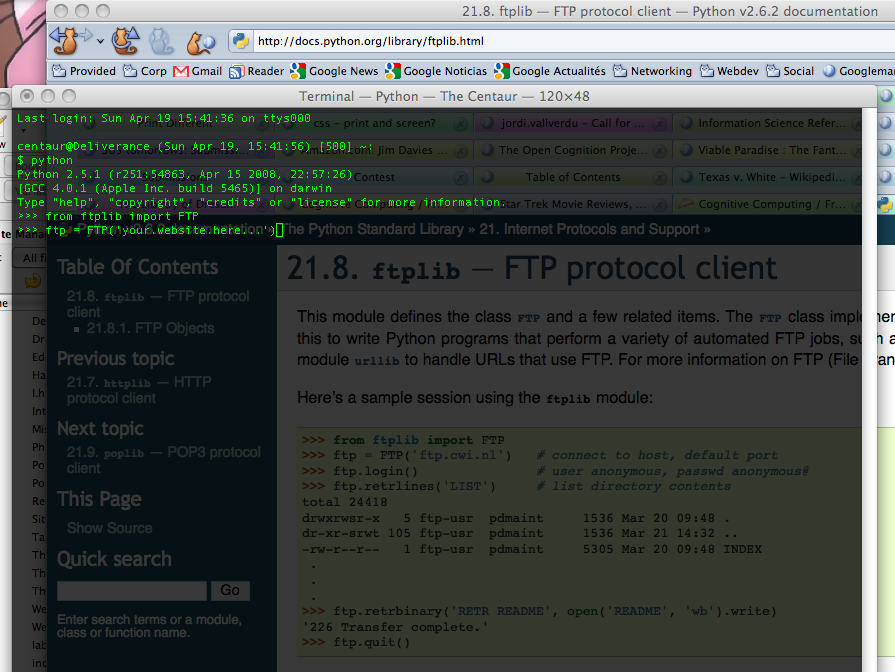 Here, I'm working on some Python code to automatically generate a list of labels for my web site. I've never used the Python ftp library before ... so I just Google'd the Python ftp protocol, found the Python doc page, and began prototyping my code straight at the Python prompt, looking through the terminal window to see the sample code beneath it.

Mmmm. Composity goodness, captured via Mac's Command-Shift-3 screenshot keystroke and edited with Preview. If you program at the command line you should try it - your eyes train up pretty quickly to ignore whatever's behind the terminal unless you need it.

Blog Labels at the Library: The Not-So-Dewey Decim... Pound Cake Reloaded How Wide Should Your Website Be? The Great Litany at Maundy Thursday Vigil Gravity Wave Lasers and Faster Than Light Renewing the Library Shooting from the hip versus shooting straight Why I Write An Age Mistaken Frost Moon Revised