The Cloning Machine Has Gone Wild

Actually,this is from an article on Mixing Memory about how you can get an illusion analogous to the Thatcher illusion with negatives.

Again, these two pairs of faces are the same, except the top two are negatives. The one on the top-left (a) is the pure negative, which Antis describes as being "analogous to an upside-down face." The one on the top-right (b) is negative except for the eyes and teeth, which are positive. This is analogous to the "Thatcherized" face (the one with the inverted mouth and eyes). The bottom two faces were created by reversing the contrast of the top two faces. Thus the bottom-left face (c) is normal, and the bottom-right face (d) is normal except for negative teeth and yes. Now the contrast between the positive face with two negative features makes for a hideous, zombie-like ex-PM (I keep waiting for lightning bolts to come out of his eyes), not unlike the upright Thatcherized face in its grotesqueness. And that's the Tony Blair illusion.

The original Margaret Thatcher illusion is just as startling:

Look at the image below. You will notice some little differences, but they hardly trigger your brain to notice them... but wait! If we flip this same image, you will see the differences are anything, but "unnoticable"! 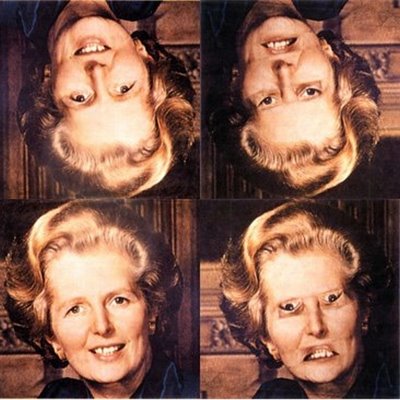 I'm told the judges would also have accepted "Proof Tony Blair is a Vampire" or "Famous British Politicains Get Possessed" as titles for this post.
-the Centaur