The long story: after Nero went on walkabout, Sandi and I visited the nearest shelter in the hopes of finding him. Once there, we found that the shelters encourage you to visit frequently, to try other nearby shelters, and to post missing pictures of your cat in your neighborhood - on the principle that people who look for their cats find their cats and those who don't, uh, really don't. In the end, I put in a notice at Pet Harbor, a lost and found animal search engine that periodically scans nearby shelters and mails you if it finds any matches for your pet.

SO ... I got the mail about the "Name UNKNOWN" shelter cat that looked darn like Nero early, early Thursday morning, too late to change the stack of appointments I had for the day. I left my knee therapy appointment at approximately 5:45 ... and headed on 101 South towards the San Jose Animal Care Center. Yes, 101 South through San Jose. Officially teh suck (which is itself defined as "something so bad it's between explosive diarrhea and traffic in San Jose on 101"). Average travel time 11 minutes? Ha! I normally avoid that road like the plague, but there were no good options that I knew of or anyone could give me that didn't involve more detouring than the traffic would save. I left at 5:45ish. I arrived at 6:55. Shelter closed at 7. You do the math.

When I arrived I found shelter visits officially stopped at 6:30, but they let me go inspect that specific cat. It was found a great distance away, freaked out, possibly feral; and when they took me to the cage the cat was hiding in a smaller blue sub-cage with dark glass. The blue box, I was told, was because the cat was probably feral; and the dark glass was because he was freaked. "And I'm not authorized to open the cage," the attendant said, "and I'm sure not sticking my fingers in there. You shouldn't either." Even with a light, I couldn't see the cat; but he didn't come when called. "If that was your cat he'd be crying to get out of there," the attendadnt said. "But come back and the vets can put up a net and we can take a look at him."

I left, but I was already sure it wasn't Nero. The cat was caught so far away. It was likely feral. It didn't come when called. And the box was small: the cat looked like Nero in the photo, absent scale, but if it was the same blue box then Nero was almost twice that cat's size. So I was doubtful. But people who look for their cats, find their cats, more oftent than not. So I went back, this afternoon, with the benefit of time and daylight, and sadly looked through frosted glass at the white forehead of a tiny little cat who was clearly not Nero. 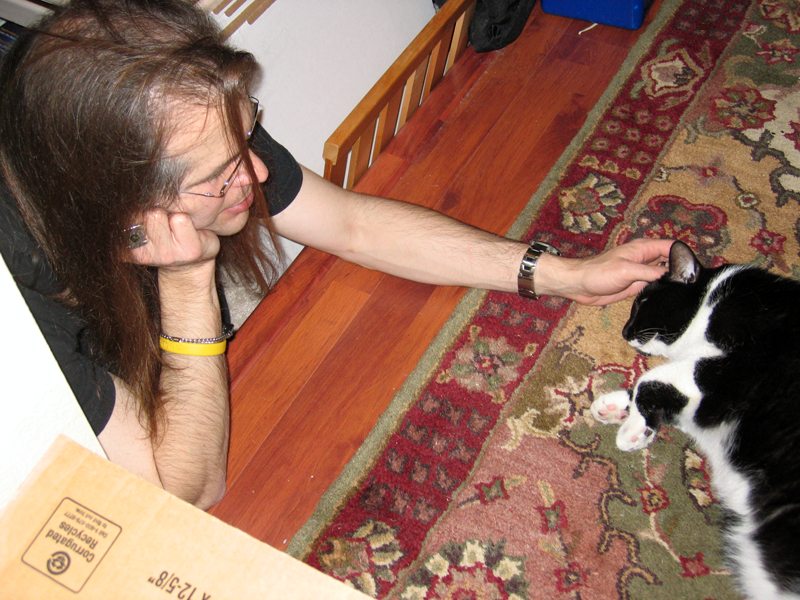 Close, but no cigar. Better luck next time...