I'm blasting through the San Francisco Bay Area for the Game Developers' Conference, my annual pilgrimage to the place where artificial intelligence is really used by people to really make things that people really care about. While out here I've seen a lot of good friends, including Victor and Steve and Neil --- and especially including the Rubrick, one of my Edge buddies from high school and college.

As we were chilling after great dinner at E&O Trading Company in the City, Derek was horrified to learn that I planned to track down to Menlo Park and hit Kepler's Bookstore and Barrone's coffeehouse. "Dude! Don't go down to the peninsula. Find something new in the city!" And I did --- I took half a day finding bookstores in the City like Stacey's and MacDonalds Books, digging through Rasputin's used record store, and scouring leather shops like Stormy Leather, Mr. S and Madame S looking for new clubwear.

But then it was time to go down to my old haunts ... Menlo Park. Palo Alto. Mountain View. It was too late to scour the Stanford Bookstore, so I hit NOLA's New Orleans restaurant just off University Avenue instead, then trolled up to Megabooks (alas, also just closed) and the mega-Borders (mmm, good philosophy bookness) instead. But this, too, must close.

But not Happy Donuts.

An incredible congregation of donuts, students, and WiFi, Happy Donuts has slowly evolved from a quiet little donut shop (circa 1997 when I lived here) into the premiere place in the Peninsula for late night information exchange. The donuts are good. The Wi-Fi is free. And they're always open --- 24/7. You tell me where the studious (and, from the conversation at the table across from me, some not-so-studious) college kids are.

And here, at last, I begin to catch up on my blog. Even with my camera's power down I can still document the experience because I carry a phone with me. Yes, Mister Christian, it's the 21st century: we may not be on the Moon, but I just took a picture with a dang phone: 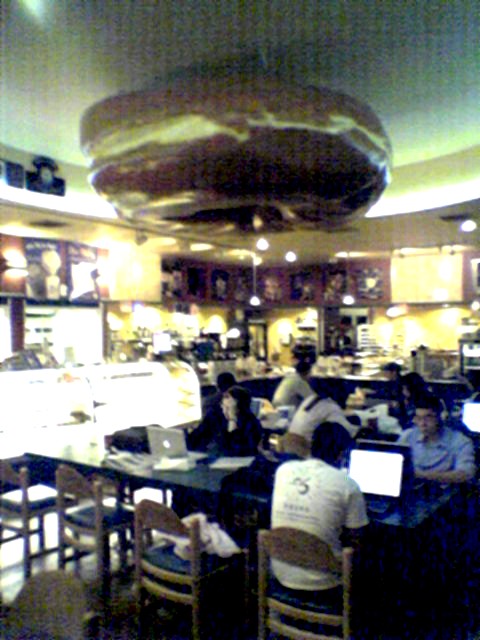 If you're too young to have taken apart your parents' AT&T-standard T phone and then put it back together by hand, you may not understand, but I just took a picture with a handheld phone that looks an awful lot like a Star Trek communicator! Captain Kirk never had it so good!

-the Centaur
// posted by Anthony Francis @ 2:07 AM Permalink

Welcome to Mars Hugh, this one's for you So tired you can't even think straight A Fractal Blog Icy hand of fate sez... Mars Orbit Achieved Dual Update Pending AND Return of the Centaur MDRS: the Pisces 1 Expedition Trying to decipher line noise? Ad Ares